Apple makes new intervention in encryption row - Independent.ie: "“The bill would attempt to force non-UK companies to take actions that violate the laws of their home countries,” said Apple’s submission.

“This would immobilise substantial portions of the tech sector and spark serious international conflicts. It would also likely be the catalyst for other countries to enact similar laws, paralysing multinational corporations under the weight of what could be dozens or hundreds of contradictory country-specific laws.”

“Those businesses affected will have to cope with a set of overlapping foreign and domestic laws. When these laws inevitably conflict, the businesses will be left having to arbitrate between them, knowing that in doing so they might risk sanctions. That is an unreasonable position to be placed in.”

And Apple says that its own incorporation in Ireland means that the UK is trying to legislate for companies outside its jurisdiction.

“If the UK asserts jurisdiction over Irish or American businesses, other states will too,” the company said in its submission. “We know that the IP bill process is being watched closely by other countries.”" 'via Blog this'
Posted by chris at 12:09 9 comments

The future of the IGF: mandate renewal?

The future of the IGF: mandate renewal? | LSE Media Policy Project: "To date, Dynamic Coalitions and Best Practice Fora have been the only components of the IGF structure allowing for the production of “tangible outputs”, although there are no formal impediments to the experimentation of new forms of multistakeholder cooperation.

The organisation of IGF main sessions in a more outcome-oriented fashion may be considerably more productive than keeping the current super-workshop format that allows, at best, repetition of the same kind of discussions enabled by regular workshops and, at worst, sterile collections of micro-statements.

The IGF process is on the right path to becoming more output oriented, and the João Pessoa meeting has clearly proven that the IGF can go further than mere debate. This year, the IGF has finally provided participants with the possibility not only to debate but also to table concrete suggestions. This is why the IGF 2015 has truly been the best IGF ever." 'via Blog this'
Posted by chris at 16:30 0 comments

Ministers Reflect | Damian Green: "The real revolution for politicians if you like would be to say ‘We’re now going to treat you like a sort of manager in a company, and we’re to have development programmes and you’re going to have training and you’re going to be assessed regularly and in an objective way and your future progress will depend on that.’

And you get to that stage and everyone says ‘Oh, it’s impossible because in the end, Prime Ministers will want more women or more northerners or they’ll just dislike people and want to get rid of them.’ Well, a strong-minded Prime Minister will say, ‘No, actually what I want is to run an effective government, and I’m going to do it that way.’

So that will be one way to incentivise the ministers, and the other thing is all about knowledge, that all politicians should know how Whitehall works and Whitehall should know how Parliament works and why Parliament is important. And both sides of that equation seem to be me to be surprisingly deficient." 'via Blog this'
Posted by chris at 12:06 2 comments

Ofcom to end VOD co-regulation: "“We are immensely proud of the work ATVOD has done since it was given the job of overseeing a brand new set of regulatory rules for video on demand services in 2010,” said ATVOD Chair Ruth Evans and ATVOD Chief Executive Pete Johnson in a joint statement. “We have done this as a co-regulator dedicated to engaging fully with the industry we regulate in order to ensure that consumers enjoy the protections to which they are entitled without the imposition of unnecessary burdens on providers of video on demand services. Under our regulation, the UK video on demand industry has grown strongly and consumer complaints have been dealt with effectively and efficiently.”

ATVOD says it will now work with Ofcom to ensure a seamless transition.

Ofcom already has concurrent responsibility to act in addition to, or in place of, ATVOD.

From 1 January 2016, Ofcom will take sole responsibility for regulating video-on-demand programme services. " 'via Blog this'
Posted by chris at 11:47 0 comments

European Parliament: Data throttling and the effects on social participation and the internal market E-006146/2013

Written question - Data throttling and the effects on social participation and the internal market - E-006146/2013: "
Excellent set of questions - note that Deutsche Telekom has increased its throttled-back proposals from 384Kb/s to 2Mb/s - and Jimmy Schulz announced to EuroDIG that he intends to work on a net neutrality law in Germany in the next few weeks...'via Blog this'
Posted by chris at 17:11 0 comments

SRoC: Slightly Right of Centre: Sources: no Digital Economy Act copyright warning ...: It's been a while since I wrote anything on the Digital Economy Act. As a quick recap, although the primary legislation to notify and ..." it's unravelling like a coalition agreement on tax evasion
Posted by chris at 20:20 1 comments

An email sent to EOn today:
"Dear sirs
Have you entirely lost your minds? You passed my MOBILE NUMBER to your subcontractor G4S without my permission? Have you ever heard of data protection and consent? Unbelievable.
In response to your impertinent email asking me to set up a DD, please advise Ali Omar that he needs training in how to adopt a professional email manner.
"Hi Chris and thanks for your email.
I'm sorry for any inconvenience caused by the 07.45 meter reader's knock on your door.
Your meter was supposed to be read between 26/04/2013 and 13/05/2013, but the meter readers are meant to work between 8am and 8pm. I've forwarded your query to the relevant department and they advised me they'll address this issue with the meter readers to make sure they understand and won't repeat that again. I trust this answers your query.
In the meantime, I wonder if you thought about setting up a monthly Direct Debit (DD) on your account. We prefer and recommend this payment method as it gives you a great deal of control of your finances, as well as we offer a healthy discount for customers paying by DD. You can find out more about our Direct Debit policy by visiting www.eonenergy.com/directdebit. May I wish you a great and a profitable afternoon!
Kind regards,
Ali Omar
Customer Service"
Note that this is the same G4S meter reader which I had flagged up as a potential burglar due to the dawn call. Which planet does this multinational company and its idiot customer service rep actually live on? Their reply email below was breath-takingly ignorant. 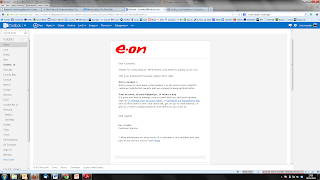